My little book! The Pianist’s Guide to Historic Improvisation made its debut as the #1 New Release on Amazon in both the Piano and Music Instruction categories.

As an Amazon Associate I earn from qualifying purchases. 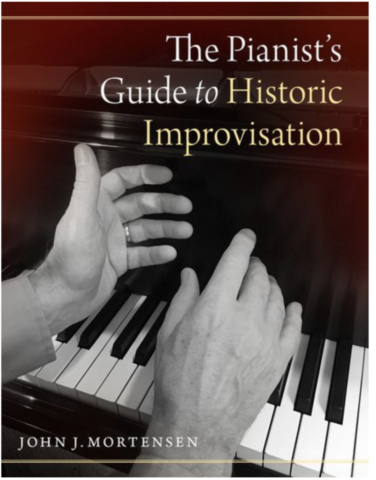 Websites and goodies from my improv friends around the world:

The Nikhil Hogan Show.  Nikhil is a cool guy who does an interview podcast of wide-ranging musical interests.  He has sought out scholars and performers of historic improvisation in particular.  I have enjoyed listening to some of my friends and colleagues being interviewed!

Peter van Tour teaches at the Norwegian Academy.  He does great research on primary sources in partimento.

Johnandrew Slominski is a theorist and concert pianist based in Oregon.

Derek Remeš teaches at the Hochschule in Lucern.

Bach, Carl Philipp Emanuel. Essay on the True Art of Playing Keyboard Instruments (1753). William J. Mitchell, trans. and ed. New York: Norton, 1949. The foundational text by CPE! The most helpful bit from his improv chapter is the section on the Rule of the Octave. Though difficult for the modern reader, Bach’s treatise sheds considerable light on the fact that improvisation and composition arose entirely from the bass line in this era.

Chung, Brian. Improvisation at the Piano: A Systematic Approach for the Classically-Trained Pianist. Chung’s book is among the most widely-known among classical improvisation publications. He aims to give pianists some basic improvisational tools. I believe, however, that the book does not teach the thought processes of 18th century musicians. In other words, the reader learns some good techniques but does not develop satisfactorily as a thinking improviser. As a result, the improvisations one learns from his volume seem not to connect with any specific historical style. His treatment of topics such as non-harmonic tones and left hand accompaniments are credible, although the reader is given no larger compositional context in which to use the concepts.

Czerny, Carl. A Systematic Introduction to Improvisation on the Pianoforte: op. 200 (1829). Alice L. Mitchell, trans. and ed. New York: Longman, 1983. Czerny’s treatise reveals the improvisational practices of that time (short preludes before composed pieces, fantasies on themes, etc) through comment and example. Nevertheless, students of improvisation will find it difficult to learn how to do much except imitate Czerny’s examples as the treatise does not delve into the underlying knowledge required to create the improvisations. Students will be left thinking, “OK, I see what you did, but how did you know to do it?”

Erhardt, Martin. Upon a Ground – Improvisation on Ostinato Basses from the Sixteenth to the Eighteenth Centuries. Translated by Milo Machover. A hands-on guide for use in class, in a group or alone. For all instruments. Including two play-along CDs in 415 and 440Hz.
Edition Walhall Nr. 905, Verlag Franz Biersack, Magdeburg 2013 ISMN: M-50070-905-3
Erhardt’s book is a guide to playing divisions on a ground (improvisations on a bass line). This is the best approach to “classical” improv for small ensembles. Works great for mixed groups including strings, winds, and even singers.

Gooley, Dana.  Fantasies of Improvisation: Free Playing in Nineteenth-Century Music.  Oxford, 2018.  This is the first comprehensive history of 19th C improv.  (It’s history, not instruction; you won’t learn how to improvise anything.)  Gooley describes key events and persons in the improv world of the 1800’s.  To me his most interesting idea is that as actual improv declined, a body of popular ideas about improv, which he calls the “improvisation imaginary”, grew in its place.  Makes sense, actually:  since fewer people were trained in it, improv was perceived as mysterious, and found an important symbolic place in Romantic literature.  Two other fun discoveries:  1.  Carl Loewe improvised songs with piano accompaniment on poems provided by the audience.  2.  A very popular form of public music-making was to “improvise a storm” on piano or organ.  Maybe I should try that.  I recommend this book highly.

Gjerdingen, Robert. Music in the Galant Style. This is a book of musicology and theory that will (or rather, could) help you improvise. Gjerdingen proposes that Galant composers thought in “schemata” — that is, two-voice outlines. I’ve found that, after studying the schemata, it is possible to play spontaneous music that is stylistically legit, has good voice leading, etc. Gjerdingen is definitely on to something. Caveat: Gjerdingen is a brilliant scholar, not a pedagogue of improvisation. He will explain the schemata in beautiful detail but not really tell you how to start from scratch and incorporate them into your improvisational life.  Still, this is required reading.

Hamilton, Kenneth.  After the Golden Age:  Romantic Pianism and Modern Performance.  Oxford University Press, 2007.  Hamilton takes a long look at the tradition of the solo recital.  He argues that what we now think of as the formal, proper, traditional recital is a recent (and arbitrary) thing.  Along the way he runs into some cheering facts about improvisation.  A fun read, especially for those who love the history of performing traditions.

Hancock, Gerre. Improvising: How to Master the Art. New York and Oxford: Oxford University Press, 1994. Great book for organists. Somewhat geared toward a modern modal harmonic language rather than “classical”.  Not for beginners!

Humphries, Carl. Improvisation Handbook.
This immense tome seems perplexing as it begins not with improvisation but rather with entry-level piano instruction: what the piano keys are, how to read music, what a quarter note is. His instruction in matters of piano technique is badly misguided and is based on ideas resoundingly discredited a century ago. When the topic of improvisation comes up at last, the instruction is largely along the same lines as Chung (above) and Stefanuk (below). In the course of the volume the author endeavors to teach the basics of “classical” improvisation along with “the jazz approach.” Even in a volume of this size, the plenitude of separate topics means that each is treated rather sparsely. Finally, I suspect that the image of Brad Mehldau on the cover is not authorized.

Rabinovitch, Gilad, and Slominski, Johnandrew . Towards a Galant Pedagogy: Partimenti and Schemata as Tools in the Pedagogy of Eighteenth Century Music. This is the account of an experiment in teaching improv at Eastman, where Johnandrew was on the faculty. Johnandrew is a brilliant guy and fantastic improviser.

Ruiter-Feenstra, Pamela. Bach and the Art of Improvisation, Vol. 1. Another book for organists. I believe this may be a self-published book. The author is obviously a fount of musical knowledge. Much of the book is taken up with playing chorales, with frequent digressions into historical issues or, puzzlingly, the author’s philosophy of life. Vol. 2, which promises to address partimenti and fugue, is due out sometime soon. UPDATE:  Volume 2 is out.

Sanguinetti, Giorgio. The Art of Partimento. It seems that partimenti played a much bigger role in musical training that anyone thought. Sanguinetti explains what they are and (to the extent anyone now can) how they work. They can be the basis of improvisation study and function as bass lines, chord charts, and coded polyphonic guides all at once.  Required reading.

Schwenkries, Markus (ed). Compendium Improvisation.  Fantasieren nach historischen Quellen des 17. und 18. Jahrhunderts.  (Improvising according to historical sources of the 17th and 18th centuries.)  This hefty tome, published just this year by the Schola Cantorum Basiliensis, consists of chapters by a group of authors associated with the Basel school.  Each author addresses a different topic.  Available in German only.  (My German is, shall we say, etwas langsam.)  The instruction is practical and very much in accordance with the way old time musicians thought.

Stefanuk, Misha. Improvisation Step by Step. Stefanuk’s volume is similar in approach to Chung’s book: it mainly teaches small-scale topics such as melody ornamentation and left hand accompaniment. I believe its limitations are the same as those of Chung’s book.

Strobbe, Lieven. Tonal Tools: For Keyboard Players. This book has generated a certain amount of curiosity because it claims to take the schemata and make them accessible to beginners. Well, not quite: this immense, colorful volume does indeed illustrate many schemata (some taken directly from Gjerdingen, and others named by the author) but provides no guidance in putting them to practical use. The author explains in the forward that this is not a method book, but it seems to me that a method book is exactly what it ought to be. The author encourages the reader (assumed to be a teacher) to incorporate the schemata into their existing teaching. I don’t know very many teachers who are equipped to do this. If someone were to write a Volume II showing how to acquire a functional, real-time-deployable vocabulary of “tonal tools”, Strobbe’s work might become a significant force in the resurgence of classical improvisation.